Premier unveils supports for women building a career in the trades 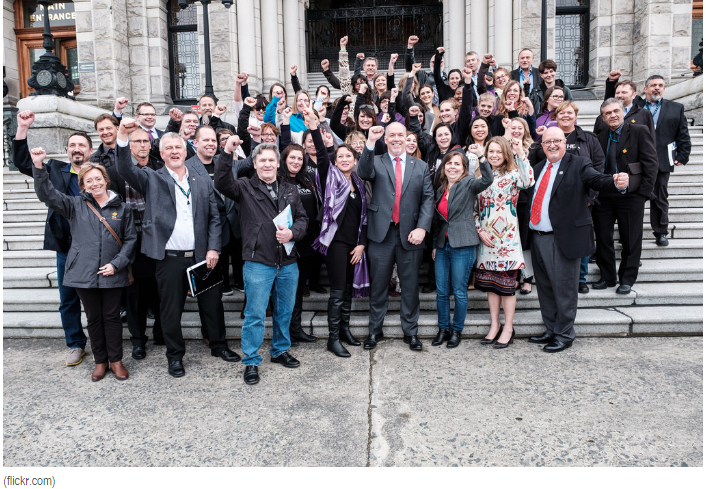 Premier John Horgan today announced a suite of initiatives to pave the way for women working or entering a career in the building trades through improved workplace supports, services and practices.

Premier Horgan made the announcement following a speech to the BC Building Trades conference in Victoria on International Women’s Day.

“Our construction industry is booming, but we’re facing a shortage of skilled workers in a number of trades,” said Premier Horgan. “Right now, only 5% of apprentices in the construction trades are women. Removing barriers to women’s participation will ensure women can get into these good-paying jobs.”

Less than 3% of working women in the province are in the building trades. A labour-market report released in fall 2017 recommended providing women with workplace supports. It noted that many of the recommended anti-bullying policies and better health and safety practices would benefit everyone on the worksite.

“Our government is marking International Women’s Day with many actions this year,” said Melanie Mark, Minister of Advanced Education, Skills and Training. “Removing barriers to women’s participation in the trades is part of achieving gender parity in our society. An inclusive workforce is about building a better B.C. and meeting labour-market demand.”

Following a call for responses, two groups were selected to develop a range of programs. One is led by the BC Construction Association and the other by the BC Federation of Labour.

Services and programs include:

“There are only 3,600 registered female apprentices in B.C., but with 900,000 job openings expected by 2027, women play an important role in keeping our province's economy diverse, strong and growing,” said Bruce Ralston, Minister of Jobs, Trade and Technology. “These initiatives will help women find well-paying jobs in every corner of the province, and be role models to younger generations.”

The programs are being piloted to break down barriers to women who are seeking jobs in the construction trades, as well as getting rid of bullying and harassment on the worksite.

“We’ve worked for years to level the playing field for women in trades and non-traditional jobs,” said Irene Lanzinger, president of the BC Federation of Labour. “The Premier’s commitment to break down barriers for us to work in high-paying jobs and address skills shortages is good for women, good for families, and good for our economy.”

“We’re proud of this partnership between the Province and our women’s committee, Build TogetHER, which not only provides support to increase the number of women in the trades, but to improve their experiences in the trades,” said BC Building Trades president Dave Holmes. “Today’s announcement gives women the support, mentorship, training and opportunities they have most-certainly earned.”

“Changing the culture of trades and focusing on retaining the women currently working in the trades is essential to the future of this industry,” said Lisa Langevin, assistant business manager and journey electrician, IBEW 213. “Those current tradeswomen are excited that we will have the support to pave the road for future women in trades.”

“I love my work, and with these new supports, more women like me will have the opportunity to not only find a trade they love, but to stay in it,” said Amy Carr, who just last month earned her Red Seal with Sheet Metal Workers Local 276. “Remember, it isn’t just about recruiting women, it’s about changing the culture so they want to stay.”

British Columbia has a booming economy, with much of it driven by the construction industry. Demand for construction workers is strongest in the Lower Mainland, Kamloops and on Vancouver Island.

“It’s no secret that women in the construction trades face unnecessary challenges,” said BC Construction Association president Chris Atchison. “The retention rates for tradeswomen are notoriously low, and employers know they need to do better. This funding unites a powerful group of industry partners with a laser focus on improving retention of women, and I see it as a very real opportunity for progress.”

Due to retirement and economic development, around 59,000 job openings are expected in the construction trades in B.C. through to 2027. In-demand trades’ occupations include millwrights, heavy-duty mechanics and carpenters. Increasing the participation of women in the building trades would help to fill many of these job openings and meet labour-market demand.

Funding for the programs is expected to be up to $1.8 million over two years. The programs are funded through the Canada-B.C. Labour Market Development Agreement.